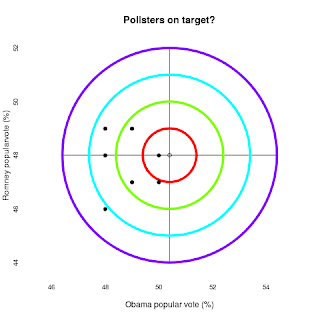 I guess that all those that tried to follow the presidential election as closely as possible are more than just a little bit exhausted mentally. I call this PEBOS - Post Election Burn Out Syndrome.

Among us some concentrated on the horserace aspect of the polls. Those will wake up a few days from now, released from their fever, and turn their eyes on other things until 2014 (or even 2016) revives their political strain.

Others, like me, will spend weeks and months studying the data amassed and not sufficiently looked into over the last year. When the final results are in, all polls cleanly collected, and the ANES 2012 data have been released, it's time to indulge in the analysis...

For now, I'll try to get some rest.

And this is the code, on github, that generated the crosshairs plot shown above. We can see that the national polls were somewhat biased against Barack Obama, though they mostly underestimated the Romney vote as well.